You are here: Home / Biography 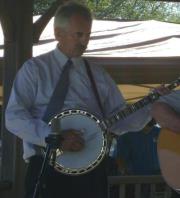 Although born in the 1940s, Les bought his first banjo at age 16 and remains the tallest man in the band. He broke his front tooth while racing through a U.S. Naval submarine, guitar in hand, in an attempt to impress local French girls with his bluegrass repertoire. Despite this injury, he was not awarded a Purple Heart. Les is the father of Nat and Sarah, both of whom dislike bluegrass, and the husband of Allison who likes it so much that she gave him the Huber flathead tone ring for his 1999 Gibson, Scruggs Standard. 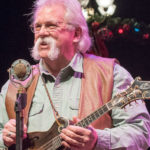 Chris, the oldest and, by his own admission, most mature member of the band, grew up outside of Chicago where daddy played piano while mama burned the vegetables. He started singing at birth and not long after was infected by the Bluegrass Bug (Flatt and Scruggs strain). Over the years, he taught himself to play guitar, bass and mandolin well enough to strum, thump and pick his way through several different acoustic bands. Soon after washing ashore on lower Cape Cod in 1972, he met and married Paula, the love of his life. Together they produced and raised two beautiful daughters, Casey and Abby, who, to the amazement of their friends, actually like bluegrass music. Despite the overwhelming popularity of the band, Chris has not given up his day job. In his spare time he likes to mow.

Dan began playing guitar while still in high school in New Bedford, MA, first studying with Tony Pacheco, a well-respected jazz guitarist and teacher who had studied and played with Django Reinhardt in Europe after WW II. Dan’s initial styles of interest were rock and roll, folk, urban and country blues. After buying a Martin D-28 in 1975, Dan became interested in the guitar styles of Doc Watson, Norman Blake, Dan Crary, and Tony Rice. Although he continued to play in various bands and to experiment with different music styles, by the mid-to-late 1980s he became committed to flatpicking guitar and bluegrass music. When not playing bluegrass, Dan keeps the beat on the streets of Providence as a gumshoe, helping to represent those accused of serious crimes. Dan is married to his sweetheart, Pam, and they have a lovely daughter, Margaux. 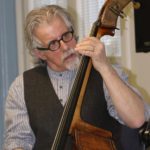 Ted is the newest member of CrabGrass and his strong bass and tenor vocals make him a natural fit for the group.Ted began studying upright bass during high school in the 60s.He started playing in bands during the 70s, playing mostly standards until he came across Charlie Pike’s famous Friday Night Bluegrass Jam in Rehoboth MA in 1985.During those many years of attending that jam and being the “shed” bass player, he discovered his love for bluegrass music. Over the years he has played with bluegrass bands from CT, RI and MA. Ted lives in Plymouth, MA.He has a 37-year-old son and two daughters: one 27 and the other 15.If he’s not boating on Cape Cod Bay, he’s roaming the roads on his green 1997 Triumph Thunderbird motorcycle. Ted lives in Plymouth with his beloved wife, Leigh. 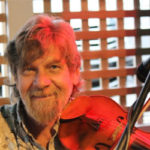 Billy has been playing fiddle music for over 30 years in the styles of bluegrass, Irish, Scottish, old time, country, swing, and rock & roll. He has played in an assortment of venues including pubs, concert stages, festivals, contra dances, weddings, and studio work. In addition to playing fiddle with the CrabGrass Bluegrass Band, Billy plays in the duo ”Billy and Beth” and the Cape Cod Fiddlers; he also performs with the Celtic Clan, Bob Peck, and Bill Slater. Billy is a multi-instrumentalist and often plays banjo (tenor and 5 string), guitar, melodeon, electric mandolin, bones, and musical saw.